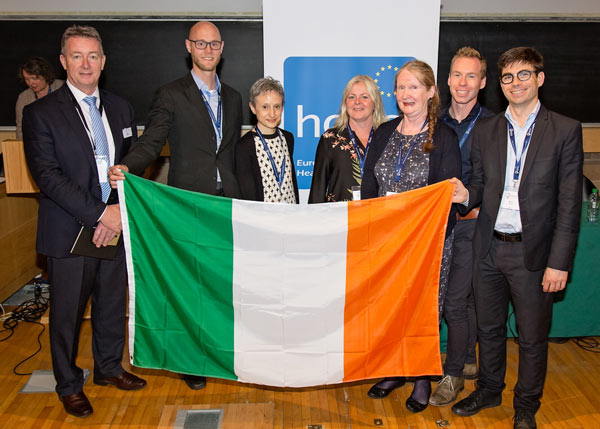 The healthcare managers who visited Ireland said countries could have the cleverest strategies but if they ignored the culture they wouldn’t get anywhere. Therefore the principle of going back to the patient to discover their experience was very important and they had been impressed by the customer survey which was carried out.

They reported on three areas – health promotion, quality of care and staff empowerment, saying they had seen lots of examples of each one, all centred around the patient.

On health promotion they said the national campaign strategy, Healthy Ireland targeted among other areas, mental health and healthy eating. They cited an attractive traffic light food choice system next to the canteen at Cork University Hospital and said that as a result of this programme, levels of central obesity had dropped by 10% and there had been a 7% reduction in the number of people with unhealthy BMI.

They had also been impressed by the mental health campaign “little things,” branded by a green ribbon, which set out to change the historic culture where Irish people were reluctant to discuss mental health issues and move to an environment where people were more open about mental health. They saw it as an important sea change which was about Ireland acknowledging there were mental health problems.

They had also been very impressed by the quality of care and the fact that managers walked around the hospital floors to see what was happening and through these quality and safety walk-rounds, discover the problems and the issues which patients were experiencing.

They also reported that in CUH a simple system had been introduced to give instant feedback to staff and facilitate monitoring if problems arose on the ward.

One of the examples of innovation we observed on our visit to Ireland was the Tallaght Hospital Model for Continuous Improvement. The programme they have developed is a unique approach to quality improvement which includes a variety of internationally recognised methodologies, tools and approaches but mainly focusses on the use of PDSA (Plan, Do, Check, Act), Lean methodologies and project management tools. When a staff member (any grade) identifies an area for improvement they seek sponsorship from a member of the executive management team and apply to attend QI training. Training takes place over three days and staff receive six one hour individual coaching during the 17 weeks allocated to complete their project. Once completed the participants produce a Storyboard of their project, present their findings/outcomes and receive their “Certificate of Achievement” at a graduation day ceremony.

“Two graduates provided us with details of their projects. The first related to Tallaght Hospital’s compliance with recommendations on the screening of patients for the risk of malnutrition. More than 140,000 adults in Ireland are malnourished, or at risk of malnutrition, half are over the age of 65 years (Rice & Normond, 2012). One in three patients admitted to hospital are at risk of malnutrition and more than 75% are at high risk (Bapen 2010, 2011) and nutritional status of many patients declines during hospital stay. The estimated cost of malnutrition nationally is €1.4 billion and for Dublin South West population this equates to €47 million.

“The Department of Health issued guidelines in 2009 that recommended that all patients should be screened within 24 hours of hospital admission using a validated screening tool such as the Malnutrition Universal Screening Tool (MUST). HIQA reviewed Nutrition & Hydration in Public Hospitals in 2016 and recommended that “hospitals must now proceed without delay to implement a system to ensure that all patients are screened for risk of malnutrition on admission to hospital in line with evidence-based practice.”

The desired outcome for the project was full implementation of the MUST tool across the organisation. The baseline data showed only 22% compliance. Following the implementation of improvements such as easy access for nursing staff to MUST calculator, further education, a hospital guideline on nutritional screening and BMI and weight loss wheels on all wards a re-audit of compliance was undertaken resulting in a compliance rate of 44%. MUST Champion have now been identified on all wards. MUST & Nutritional Care Plans have been included in patient packs along with BMI, Weight Loss wheels and Ulna rules. All wards will be provided with their individual results from the scheduled repeat audit in July 2017.”

The presenters said most Medical Photography units in hospitals throughout Europe now used image management and delivery systems for delivering patient clinical images to their clients in all specialities. The second project showcased in Tallaght was the implementation of this image management system which is linked to the patient file and viewable (with permissions assigned) by the physician in clinics, theatre and/or at multi-disciplinary meetings. The advent of digital imaging meant that high quality clinical images could be delivered almost instantaneously to the requesting physician. However these images needed to be stored, retrieved and managed while at the same time complying with relevant legislation such as data Protection and Freedom of Information Acts. Some of the outcomes from the implementation included:

As part of the implementation process a photo triage clinic was instigated in conjunction with Dermatology Department for suspected skin lesions. Patients on a waiting list were called for photography prior to be seen by the Consultant Dermatologist. The consultant then reviewed the images and the patient wais fast tracked if the lesion was deemed to be of sufficient urgency. The pilot had proven to be very successful and had led to early identification of suspected skin cancer in two cases.

“A sign which indicated that somebody was at the end of life and people in the vicinity should treat the area around the bed with consideration “was discreet and simple and impressed us,” they concluded.