In a broad ranging address, on “Healthcare Managers Adding Value,” he said that Ireland was “on the road to transformation” where health services were concerned. There was the potential to transform elective and emergency services, integrate primary, social and hospital care and introduce a new leadership paradigm and direction.

He thought there was potential to transform service by improving the processes of scheduled and unscheduled care, tackling workforce shortages and integrating pre and post hospital care.

“I think Health Minister Simon Harris is right when he suggested that we might have some elective only facilities.”

He said while we did not want to risk destabilising some of our smaller facilities, there was significant potential for some of our hospitals to develop on-campus stand-alone elective care centres. This policy would help to tackle some of the cancellations that were common-place, improve unscheduled care, but would have to go hand in hand with an effective long term future workforce plan.

There is significant potential for some of our hospitals to develop on-campus stand-alone elective care centres.

At hospital level, we should avoid the mistake of optimising “on what is currently done inside our hospital services. We should really only optimise on what needs to be done inside hospitals. We should support the transformation plans pre-hospital that reduces attendance and admission and post-hospital to prevent delay. “

Turning to spending, Mr. Connaghan speculated that while spend on healthcare services in Ireland was probably now at the same level as 2009 (approximately €14.5 billion), and while there had been a significant increase in productivity over those years, this in itself needed to be continued into the future. Over the course of the next 15 years, the Irish population was set to increase by over 10%, with the over-65s increasing by over 50%, and the over-85s doubling in number. This would mean an increased focus on driving as much efficiency and productivity from the existing healthcare spend as we could manage while maintaining/ improving the quality of our services.

The concept of co-production in delivery of healthcare services examined earlier in the conference was also a theme of Mr. Connaghan’s presentation.

After less than forty days in post, Mr. Connaghan advised that his initial impressions were based on imperfect knowledge at this point. However it occurred to him that while we had lots of excellent strategy in the Irish healthcare system, there was some difficulty in operationalising this and getting leverage at local level.

He said he was encouraged with what he had seen so far in terms of some of the exceptional work that was being carried out in the pursuit of the transformation of the Irish healthcare system. He commended the St. James’s Track and Trace system, the Sligo Eye Care Award Winner, and the work being carried out on Patient Flow (though this list was not complete and there were many other aspects of good practice that he would commend).

He also thought that health services were culturally ripe for change inside Ireland, though there were issues about how we could spread best practice across the system. There was indeed management and clinical enthusiasm for change – the question here was how to encourage the spread of good practice.

We should really only optimise on what needs to be done inside hospitals.

Mr. Connaghan discussed various aspects of leadership during his address. He outlined how the old leadership paradigm centred more around formal structures and the move that was apparent across both public services and industry to the new leadership paradigm where influential skills and political, social and emotional intelligence were now coming to the fore.

In many ways, to the manager, the world looks volatile, uncertain, complex and ambiguous. He encouraged managers to develop a vision (with an intent that seeks to create a clear future) to consider how they could develop and grow their understanding and by the pursuit of clarity in their work to develop a collaborative approach to rapid change which would mean a more agile and transformational workplace.

“Consider transformational leadership – I would propose four key themes around this based on the following:

In the final part of his presentation to the audience, Mr. Connaghan speculated on where this would lead us to in the future and developed the following characteristics of what a high-performance Irish healthcare system might be like. He stressed that these were not mutually exclusive nor was it an exhaustive list:

“I think Ireland is on the cusp of something big. For the first time, we have a ten year all-party consensus which gives us the direction for the future. At the same time, I know that the Department of Health is putting together a ten year capital plan. All of this gives me confidence and optimism for the future of Irish healthcare.” 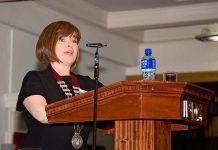 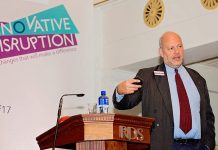 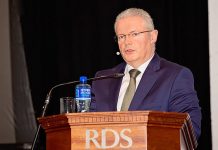 The impacts of Brexit on healthcare staffing and services