How activity based funding works

Activity based funding will not only count cases – but will measure the complexity of the cases in ‘weighted units of care,’ which can be linked with money allowing much more sophisticated planning and control, writes Ms. Maureen Cronin.

The Department of Health “Policy Paper on Hospital Financing” outlines proposals to transform the Irish health funding system using a new ‘Money Follows the Patient’ (MFTP) approach.  What does that mean and what has happened so far?

Firstly, the Healthcare Pricing Office (HPO) was established on January 1, 2014 merging the former ‘Casemix’ staff with the ESRI staff who managed the HIPE system.  These teams have moved into the new ‘Brunel’ building at Heuston South Quarter.  Maureen Cronin, Assistant Chief Finance Officer, has been appointed as Head of the HPO and Executive Lead for the implementation of MFTP.

MFTP is a system of funding care based on activity.  For this reason there is a new operating title of ‘Activity-Based Funding’ or ABF.  Instead of giving block grants to providers, care will be classified into ‘episodes’ and payments will be made for those episodes.

The new system will not only count cases – but will measure the complexity of the cases in ‘weighted units of care.’  These weighted units can be linked with money allowing much more sophisticated planning and control.

In hospitals there are some 16,000 procedures in the HIPE classification system.  These group into about 1,050 different episodes called ‘Diagnosis Related Groups’ or DRGs.  In the new system, payments will be made for each DRG using a national average price.  There will be no more block budgets for inpatients or day-cases.  In time our planning model will look like the following table – and include the cost of each DRG. 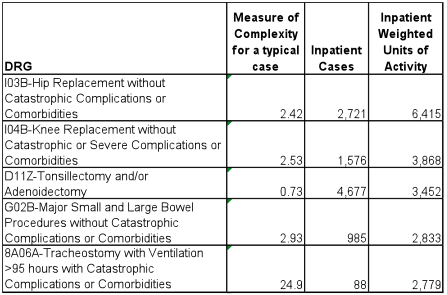 Note:  Measure of complexity in this table is an average and cannot be multiplied by cases to obtain weighted units of activity

ABF was implemented in the Nursing Home Support Scheme in 2012.  There is currently only one episode of care in NHSS – a period of time being cared for in a residential setting.  Each time an episode takes place, the provider is paid.  Critically, the system links volume with price and allows funders to see explicitly what is being delivered for the price being paid.

The 2015 ABF work programme involves benchmarking each hospital group against national average prices for the range of work or activity being delivered.

Once we establish the relative position of each hospital group a programme of work is required to determine why a group may be operating above the national average.

For a period of time groups will continue to receive funding equivalent to their expenditure using ‘transition payments’ however these payments will be phased out and groups will be required to move their unit costs towards the average.

There will be exceptions to this principle – for example remote locations with low volume will still be required to operate but may not be able achieve the national average unit cost.  These exceptions are known as ‘structural disadvantage’.

The ABF team is running a conference in the Royal College of Surgeons on May 28, 2015 and registration is available at www.hpo.ie.  The conference will be opened by Minister Leo Varadkar and the keynote speaker is Dr. Frank Heimig – Head of the German Hospital Reimbursement System.  Dr. Heimig will explain how ABF changed clinical practice in Germany.

Maureen Cronin can be contacted at maureen.cronin@hse.ie