When adverse events occurred we needed to engage with families, set up an incident investigation within 24 hours with a target for completion, tell patients what had been done and apologise to them whether or not they have been harmed, extract the learning and share the learning nationally, Dr. Philip Crowley, National Director of the HSE Safety and Quality Division told a Dublin North East Forum at Beaumont  Hospital.  Maureen Browne reports.

Speaking on “Prioritising Quality And Lessons From Recent Reports”, he said that there were many challenges facing us.  We had reduced staff and funding from the health service and now had many people doing other people’s jobs as well as their own.  This led to a lot of stress at times. But it should also be remembered that we had done good things in this time of constraints – we were more serious about efficiency and had rooted out a considerable amount of waste.

We measured a lot of activity but we could not say that we had clarity on the quality of care we were providing. The Government change agenda was radical and affected the structures and the methods of financing health care. It was important that we concentrated  on processes to deliver quality of care as it was from this that much improvement would come.

While Dr. Crowley does not have operational control over what happens in hospitals he has in recent times responded in the media on behalf of the HSE to errors which have occurred in hospitals.  He said it was important for somebody to take corporate responsibility, apologise to patients and their families and lay out publicly that the HSE took these matters seriously and was committed to learning from them and trying to prevent them happening again.

Apart from the impact on patients, errors had many other adverse effects including undermining public trust, the lowering of staff morale, the inculcation of a blame and fear culture and the possible rise in defensive clinical practise and behaviour.

“If there is negligent behaviour or a pattern of poor care then that must be addressed but with many incidents environmental factors and other constraints play a key role and merely blaming an individual health or social care professional is unfair and counter-productive.  The danger of all this scrutiny is that we become more defensive in how we practise.  If everyone is terrified of the occasional unpredictable poor outcomes it puts clinical staff in a place that is unsafe for patients.  It is essential that we support our staff.  We have to front up to what has occurred and also to realise that the people involved in care can be severely stressed and need support and I worry whether we support our staff sufficiently.”

We measured a lot of activity but we could not say that we had clarity on the quality of care we were providing.

Dr. Crowley said that the international experience and evidence was that most organisations did not have plans in place if things went wrong. Each crisis was therefore regarded as unique, links were not necessarily made to previous events and organisations often made matters worse – and harmed their staff – by their response.  Also organisations generally did not learn from these events.

The first priority of care was that patients should not be harmed.  If a patient was harmed, the event should be dealt with rapidly with the patient and family – the HSE open disclosure policy was a very effective policy and was being implemented across the service with more than a hundred workshops training staff in open disclosure.

The second priority must be staff and the third the organisation.  Healthcare providers involved in unanticipated medical errors or adverse event could be very traumatised by their experience.  They frequently felt a personal responsibility for the patient outcome and might feel as though they had failed the patient.

It was estimated that staff suffered a traumatic effect in between seven and 40 per cent of medical incidents, depending on the severity of the incident, organisational responses, support mechanisms and professional and organisation culture. This might cause further patient safety risks, including the willingness of individuals to report future incidents.  There were longer term consequences for safety culture, openness, team-working, defensive practice, disruptive behaviour and working relationships, staff health, welfare, recruitment and retention.

Dr. Crowley said that the integration of corporate with clinical governance was essential and quality and patient safety should be a consistent priority agenda item. Board members needed to listen to and engage with service users and Board members should do walk-arounds to observe care directly. It was essential to have the right structures and processes to achieve Quality and Patient Safety (QPS) and there should be an investment in quality improvement training for managers and staff.

Dr. Crowley said he had learned from high profile incidents that “we need to engage with families, set up an incident investigation within 24 hours with a target for completion, be much more timely and not create an investigation industry, tell patients what has been done and apologise to them whether or not they have been harmed, extract the learning and share the learning nationally.

There was robust evidence which showed that if you had a health care institution where staff said they would recommend it to their mother or family then the patients who went there would say the same.

“As managers and clinical leaders what can we do?  Fatalities were common in Formula 1 up to May 1, 1994 when Ayrton Senna died. Then they said they would run no more races until they addressed all the known causes of fatal accidents.  Since then nobody has died in Formula 1 and I don’t think any other industry can point to that trajectory. Formula 1 put a neurosurgeon who dealt with accidents at the race venues in charge. Since then similar crashes have occurred, but people have walked out because the safety of the drivers has been put above finance, human resources and everything else.  I don’t think we are there yet in the Irish health service.”

Dr. Crowley said that worldwide there was robust evidence which showed that if you had a health care institution where staff said they would recommend it to their mother or family then the patients who went there would say the same.  It was an absolute correlation.

We had to build structures into incident responses to recognise and mitigate the potential risks to patients after the incident, recognise and support “secondary victims”, the staff and promote a genuinely open transparent non-judgemental reporting culture.

“David Muscvi, CEO Windsor Regional Hospital in Ontario changed the performance of his hospital by changing the culture of the hospital through introducing ‘walking in my shoes,’ where he emailed staff and said he would like to work with them for a few hours on a specific day.  We were looking at that and then we discovered that this was also being done in Our Lady’s Hospice & Care Service in Harold’s Cross in Dublin, where it had been decided systematically to understand each other’s roles through job shadowing. So we don’t need to study Ontario, we can study it at home.” 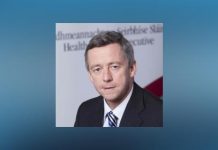