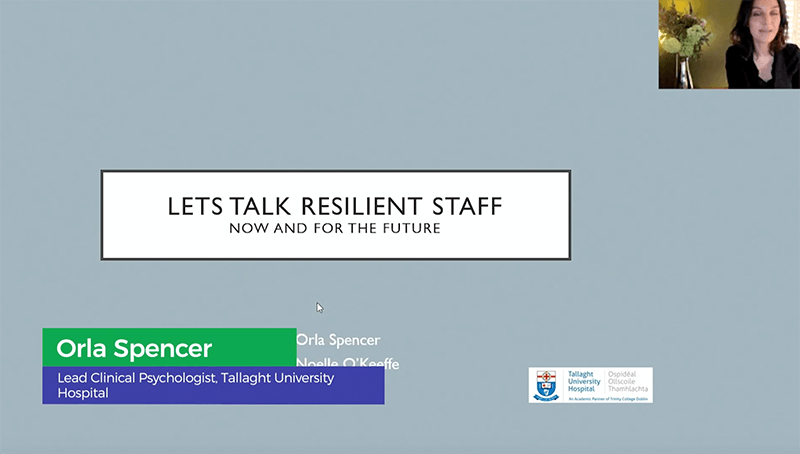 They said lessons learned during the pandemic should be applied to the future.

Successful staff care initiatives from the pandemic should be formalised into training and induction structures, staff should become aware of informal and formal support structures available, the hospital should have a psychologist with a remit of staff distress /trauma-informed management, wellness behaviour rewarded in a tangible way and Schwartz rounds initiated.

Their experience during the pandemic had shown them that while hospitals needed hierarchal structures for correct clinical decision making and patient safety, flat structures were imperative for hospital wellness.

They were speaking on “Let’s Talk Resilient Staff Now and for the future.”

Ms. Spencer said that in Tallaght University Hospital they had put together a crisis intervention programme to keep staff safe during the pandemic.

“We wanted to deal with the immediate challenge, keep staff well through the pandemic and future proof them to keep them well beyond the pandemic,” she said.

“Resilience can be learned, and the core elements of a crisis intervention programme are prevention through education, development of a Resilience Hub and future-proofing staff care,” she said.

“Distress can be managed through early intervention, through educating people around what their reactions mean and how they can manage their reactions.  This stops normal distress from becoming a more difficult mental health problem further down the line.

“We developed a Resilience Hub, which had two component parts –  a resilience training programme that we provided via zoom to teams across the hospital and an individual online support service for staff throughout the hospital.

We had 36 resilience groups in total via zoom, which were attended by 580 staff. Each meeting ran for 40 minutes or so – we had to be quick as people were busy.  We also took 75 direct support staff calls, which were hour-long sessions, and we gave specific and expert training to ICU and ED teams around debriefing procedures pre and post-shift.

“We provided training to ICU and ED teams around debriefing procedures pre and post-shift, in order to keep them well and allow them to be refreshed to go into the next shift.  Out of all that learning, we developed an education podcast for nursing students and medical trainees and that now forms part of their induction programmes. And we developed a more general podcast on resilience which is available hospital-wide.

Ms O’Keefe said that there were a number of key messages they wanted to impart as part of the programme.

“We were aware there would be certain reactions that people would go through. It was important to normalise distress as a normal event occurring during an abnormal event like a  pandemic. So, people started to understand that their reactions were within the context and they could bolster their own resilience and recognise what were the things that they did for themselves that kept them well.  We were recognising that resilience lay within the individual, within a team and within an institution so that as we worked with the ICU and ED teams, we could keep individuals well by building strong teams which were underpinned and supported by the institution.  It was very important how these three strands were highly interwoven within the hospital.

“We also identified a hospital as a trauma prone environment, and we tapped into the term moral injury, wherein very difficult circumstances such as a pandemic there are a lot of challenges and choices which may contravene staffs’ usual code of practice.  Very difficult choices that in time they look back on, reflect and wonder. So, it was important that these ideas of moral injury were explained and externalised and understood, again within context.

“As we did the resilience sessions, we got a lot of feedback from much different staff throughout the hospital. The kind of feedback we got was staff saying things like:  ‘Great to understand why I am reacting the way I am – that  it’s normal,’   ‘I liked that the psychologists knew even where we were located, it felt personal.’  ‘I realised that working in health means even after COVID, I need to take care of myself and watch out for my colleagues.’

“The point which people most appreciated was when it was explained to them that their reaction was very normal in the current situation.

“They also appreciated the support provided by the psychologists in the hospital.  We all belong to one tribe and in a crisis, belonging to a tribe as human beings is central, so we are all supporting one another in very different ways.  Equally from that people learned  that their support of their teammates might be something as simple as a smile, a pat on the back, maybe noticing that a  person did not quite seem right at a particular time and this was the simple support needed for the entire system to get through the pandemic  in a way  that they would continue to function.”

Ms Spencer said that they had learned lessons that could probably be applied to the future.  “We recognised that hospitals were very hierarchical places to work and very role-based to a large extent.  That was necessary for correct clinical decision making and patient safety, but in terms of keeping a hospital healthy, it occurred to us that a flat structure for wellness was almost imperative to keep people connected, to make people feel valued and make people feel their wellness was as valuable as anyone else’s wellness in the institution.

“One of the things which Noelle and I did, which on reflection we felt was quite important, was that when a choice was available we suggested that the team rather than the discipline should come together for resilience work.  For example, if it was an ED team, we suggested all the component parts of that team be in the room learning to be resilient together.  That included consultants, other doctors, cleaners, porters, nurses, clerical assistants the caterers.  That had a massive impact on how cohesive the team felt afterwards.  They felt a valued part of something during a difficult time. Team-based over discipline-based training works best.

“Resilience also had a domino effect within the institution, in so far  as when one  team found it was helping another team began to ask for it and I think that is a sign of what a healthy working environment should be.”

One of the other messages that we learned was that we could keep people confident at work no matter what the work circumstances were.

Ms Spencer said Connected Care was a real message which they sent out. The message was  “If I am to be healthy,  my team can be healthy,  my institution can be healthy and fundamentally that means we serve patients in a better way.   One of the other messages that we learned was that we could keep people confident at work no matter what the work circumstance was.  Some of our younger trainees, younger nurses or younger physiotherapists, were coming to us in crisis because they didn’t feel confident to do their job.  By explaining that nobody felt confident during the pandemic, we managed to normalise that reaction and get them back into work with a sense of control, a sense of focus and a sense of confidence.

Ms O’Keeffe said that they would have a number of recommendations following the crisis.  They would like to ensure that the staff wellness that they had tapped into was not just seen as something nice to do, but an essential component of staff care and thereafter patient care.  “So, we wondered how we could make this happen  Is there a possibility of formalising staff care initiatives into both training and induction it is part of nursing training and now some of the medical trainees’ inductions as well.  If we think of things like chemical awareness and hygiene, that is mandatory training.  Can we make these initiatives mandatory and if we can’t, can we make them motivational?  Can we reward good wellness behaviour?  For example,  if somebody attends a Schwarz round or a wellbeing talk, or resilience session can they get stamps on their reward card and perhaps after six stamps they get a free meal in the canteen.

“We also became aware of informal and formal support structures within the hospital.  We learned that there was a lot of informal support-givers there.  For example,  there was a social support club that had a lot of members and some of those we spoke to, who were on the portering and healthcare staff, were almost being counsellors.  We are now training some of these informal support-givers so that they know how to mind themselves and how to know when an issue might need a referral to perhaps the psychology department or onwards.   We are also looking to have a psychologist whose remit is staff distress and trauma-informed management. We are working in a trauma prone environment and therefore the lens through which we deliver any intervention does need to be trauma-informed.

Noelle O’Keeffe is a Senior Counselling Psychologist and Professional Coach working in Tallaght University Ireland and CHI @Crumlin.  She works primarily on the impact of Trauma experiences, namely cardiac health and child sexual abuse.  Her focus on Trauma-Informed interventions brought much to bear on the response of the Psychology team to the COVID 19 pandemic impact on hospital staff.  She delivered resilience team training to hospital-wide staff and provided individual staff support during this crisis.  She continues to highlight the needs of healthcare staff to understand trauma reactions and ensure context-specific interventions are instilled post-pandemic.

Orla Spencer is a graduate of Trinity College Dublin. She currently works as the Lead Clinical Psychologist in the Pain Service, Tallaght University Hospital, where she is involved in overseeing the rehabilitation of persistent pain sufferers. She recently provided resilience training and psychological support for staff during the COVID 19 Pandemic. This work now forms part of the regular induction training for medical interns and nursing students in TUH.