Home November 2016 Volunteering in ‘The Jungle’

Over the past year, Sharon Morrow, HMI Council Member, and CEO of LauraLynn Children’s Hospice, has spent some of her annual holidays volunteering in the medical caravans in the Refugee camp in Calais, infamously known as ‘The Jungle’. Maureen Browne reports.

The camp has since been demolished although Sharon returned to Calais in November with some of her colleagues from LauraLynn. “I’m delighted with all the support we have received from the staff and families to provide food and supplies to those who are waiting processing in the French Reception Centres and to those who decided to flee the camp before its destruction and are now living in smaller makeshift camps.”

The French Government did not recognise Calais as an official refugee camp and so there was no NGO support in the camp. The result was that the medical needs of the people located there were met by volunteer healthcare professionals from the UK and Ireland, in three caravans located in the centre of the camp.

These injuries were sustained during attempts to jump on moving lorries, from the razor wire that covers the extensive fencing around the port, or inflicted by the French Police if the unfortunate person was caught trying to get into the UK.

Said Sharon “It started with a Facebook post by a former nursing colleague, Deirdre Lang, asking for support for a volunteer trip she was making to the camp. I contacted Deirdre and the next thing I know I’m coming along too to volunteer in the medical caravans. We thought we would be looking after coughs and colds, and possibly some head lice and scabies but what we found while we were there was very different. The injuries, some quite severe, ranged from cuts and bruising to lacerations, soft tissue injuries and broken bones. These injuries were sustained during attempts to jump on moving lorries, from the razor wire that covers the extensive fencing around the port, or inflicted by the French Police if the unfortunate person was caught trying to get into the UK. In addition to the physical and sexual abuse we witnessed – particularly amongst the many unaccompanied minors in the camp, there is the mental and emotional trauma of losing loved ones on the journey from their home country, of fleeing their country having witnessed the murder of family members or because what was once their home is now a war zone.

“With each trip we made to Calais, we brought medical supplies to help stock the caravans – dressings, gloves, etc. I have to thank Tallaght Hospital which have been more than generous with giving us out of use/expired stock.”

The camp was home to mostly young men from Sudan, Ethiopia, Eritrea, Pakistan, Afghanistan and Syria who lived in tents or huts made from wooden pallets and plastic sheeting. “It was very cold in the camp at night. We always tried to bring out a large supply of socks, gloves and hats when we visited, as whilst the tents provided shelter from the rain, they were of little use when it came to keeping the cold away. We often saw burn injuries in the caravans as fires were sometimes lit too close to tents and pallets in an attempt to keep warm’.

“Why do it? ‘I am not particularly political or an activist but there was a real need in Calais and with my background as a nurse, I felt it was something to which I could make a worthwhile contribution. That said, I actually got a lot more out of the experience that I ever put in. I met some wonderful people, brave and courageous refugees, so full of hope, despite the pain and suffering they had endured along the way. I also formed some great friendships with the other volunteers – there is camaraderie when working in the caravans. The stories shared by the refugees who visited the caravans have a profound impact and the volunteers support each other through a range of emotions, from sadness to anger to amazement as to how this could be happening in a place so close to home, in a country where most of us have holidayed at some time.

“Would I recommend it? Of course, the camp in Calais may have been demolished but the needs of refugees all over Europe are greater than ever – there are many ways to help whether at home or abroad and everyone has a worthwhile contribution to make.”

Sharon is also a Non-Executive Director of Tearfund Ireland and will gladly advise anyone interested in volunteering or helping in any way. 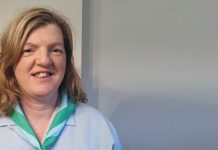 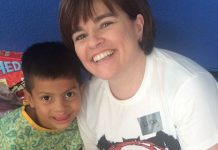 Working for a smile!