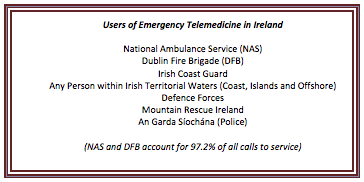 An SLA has existed between the Irish Health Service Executive (HSE) and the Irish Coast Guard (IRCG), with support from the Irish Naval Services, since July 2001. It provides for the statutory provision of telemedical support to vessels in Irish territorial waters, required for Ireland to comply with its legal responsibility towards workers at sea under European Council Directive 92/29/ECC (updated via amendment 1882/2003). In addition, MEDICO Cork is part of the National Framework for Emergency Management, as included in the Multi-Agency Protocol “Land Based Response To Marine Emergences” (May 2011).

Calls are received either directly from users or through the various agencies control rooms, via a dedicated telephone exchange or increasingly through The National Digital Radio Service (NDRS); a secure digital mobile radio network available exclusively for the use of public safety sectors in Ireland.

A quiet telemedicine-room, free from distraction, has the ability to forward calls, conference call, access email, and access both intranet and internet based electronic resources. For research purposes, the room has live video feed capability and enhanced data-transmission through the University College Cork (UCC) Network.

All calls are recorded electronically and stored in a database on the HSE Network, becoming part of standard secure HSE patient records. Access to these recordings is strictly governed. Records are anonymised and routinely thematically audited to improve service delivery.

A system of feedback to staff regarding their call handling, has iteratively led to a programme of induction and Emergency Telemedical communication training for both users and providers, which focuses on human-factors and the role of cognitive bias in influencing telemedical interactions. 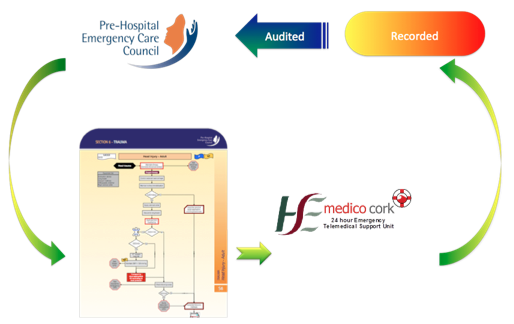 Coastguard and Naval calls account for 2-3% of yearly totals.

Uniquely, there are 77 Islands off the cost of Ireland, with a stable population base of 2,896. The largest being Inis Mór, with 845 inhabitants. These figures obviously don’t account for seasonal or holiday seasonal flux, which can see island population sizes literally treble overnight; neither do they account for day nor cruise ship visitors which can range into the thousands.

The HSE’s National Ambulance Service (NAS) approaches islands as if they were ships at sea. The 999/112 calls originating from Islands get received by NAS control, but then handed over for initial response and subsequent retrieval of the patient to the mainland, to the Irish Coast Guard. NAS then manages onward transfer to hospital.

The Irish Coast Guard has a number of resources at its disposal: